When working with vectors it is absolutely critical to also consider the size of the CPU cache. If the arrays will not fit in the available CPU cache, a large (sometimes up to 3x) performance penalty will be imposed upon the algorithm. This means that vector arithmetic's should not be applied to vectors whose size exceed certain maximum length. Typically the maximum number of double precision elements ranges from 800 to 2000 per array. Longer vectors have to be split in pieces and processed in parts. MtxVec provides tools that allow you to achieve that easily. The following listing shows three versions of the same function. 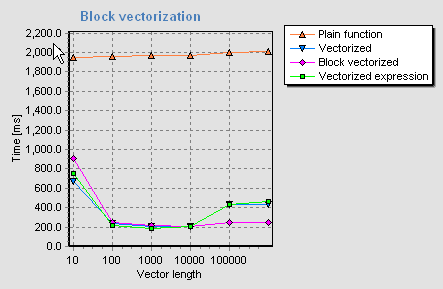 On P4 2.4 GHz CPU the vectorized function is about 9.5x faster than the plain function when using Delphi 6. The block vectorized version of the function is a little slower for short vectors but maintains its high performance even for vectors exceeding 10 000 double precision elements. (For a CPU with 512kB CPU cache the limit is about 10 000 elements and if CPU with 128kB cache is used the limit is about 2000 elements.)